Link to transcription of same

The Tetbury wassail tradition is particularly well-documented.  A group of wassailers from the Wilkins and Price families kept up the custom until possibly the onset of WWII.  They were proud of the fact that the custom had been handed down for over 150 years.  The wassailers went out at Christmas time.  There were from 8 to 12 men involved and they were dressed in Romney coats (coats given as charity).  They carried a small bowl with a Christmas tree decorated with ribbons.  People were encouraged to put money into the bowl.  They also took a bull’s head (see photo) and the same head had been passed down in the family for 150 years.  Richard Chidlaw was able to obtain a photo of the Bull in 1974.  The Bull was subsequently thrown away as it had developed woodworm.  They travelled around various houses including Chavenage House.  In the 1930s there was a group of children singing the song also.  Reg Wilkins, the last surviving wassailer, was recorded by Vera Phillips and Doug Goulding of the History of Tetbury Society, possibly sometime in the 1990s, and this is the recording heard here. 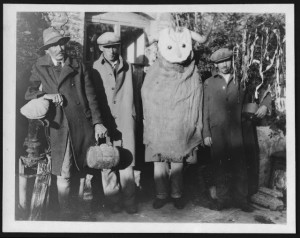 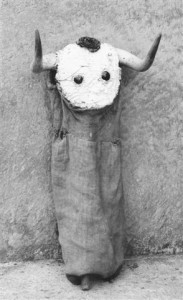 The photo of the wassailers taken by James Madison Carpenter in about 1930 shows the wassailers, plus bowl and “Bull”.  Note that the wassailers are dressed in plain winter clothes.  This contrasts with the description of the Tetbury wassailers obtained by Richard Chidlaw and Andrew Kennett on 5 September 1974 from Mr C T Apperley: “In early December for 3 weeks, finishing at Christmas, a band of about 8 farmworkers (3 of the Cleaver Family and a Cox and a Prior were involved) went wassailing.  They toured round the outlying villages and then finished up with the town, going in pubs and private houses.  The men wore fancy clothes, flowing robes, Arab hats, crowns, and masks, anything to make them look fancy over their corduroys.  Each had his mug in different types – stone jar or a more fancy one for preference (and the landlord would fill these with drink for them) and they carried in their hands a staff, ash or hazel cut out of the hedge and this had a bunch of evergreen – yew or ivy and holly tied on the top.  Their music was an old accordion, mouth organ, bones and triangle and they took with them the wassailing bowl and the Bull’s Head.  The bowl was a large round china washstand bowl with wires round and trimmed with evergreen held by the wires around the edge of the bowl.  This was filled with fruit and sweets – apples, oranges and bananas – to give to the children and then to their parents to put in coppers.  The Bull’s Head was carried by a Cleaver – it was a masterpiece – a big stuffed head of a Gloucester Red Bull (!)  with horns coming round and he had it on a short pole held close to his chin and around him was a cloak made of brown cloth.  The head was trimmed up with ribbons round the neck to make it look festive and sometimes he’d put a lamp behind the eyes and the glass shining out would frighten people.  When they came into a place, the Bull’s Head would stand and shake his head to and fro.  He didn’t chase people – there was no room.  They’d sing Christmas carols and any jovial song, but especially they’d sing the Wassailing Song.”

It appears that the tradition passed from the Wilkins family to the Cleaver family at sometime in the 1930s, or perhaps there were 2 parallel traditions in the town.