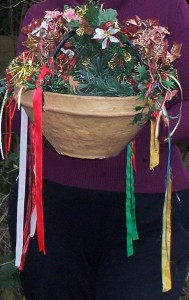 The word wassail has meant various things over many centuries.  The word derives from the old English ‘Waes Hael’, a greeting meaning ‘Be Healthy’, an old English equivalent of “Cheers”.  So from the 9th Century it turns up as a greeting or toast and and in the expression ‘wes thu hal, Maria’ meaning ‘Hail Mary’.  In the late 13th Century Robert of Gloucester recounted the legend of the marriage of the British king Vortigern with the Saxon princess Rowena, making the latter drink to the former with the words ‘waes hael’ to which the reply was ‘Drink hael’.  By the 16th Century, there is evidence that the word had become a custom, with the blessing of fruit trees in Kent.

Shakespeare mentions the word twice.  In 1595 in Love’s Labours Lost, he wrote:

‘He is wit’s peddler, and retails his ware
At wakes and wassels, meetings, markets, fairs.’

So the word was already being associated with merry-making as well as having the sense of being a blessing.

By the 19th Century, folklorists and song collectors were becoming aware of the existence of local wassail songs.  One of the earliest to be noted was the Sussex wassail, collected by Broadwood and published in 1843.

By this time, the custom had taken on 2 basic types.  There was the apple orchard wassail, when villagers would go, and still do so, into the orchard to bless the cider apple trees.  This ceremony is normally accompanied by rhymes to bless the trees, the firing of shotguns into the branches, the pouring of cider onto the roots and the hanging of pieces of toast soaked in cider on the branches.  These elements have also become part of the modern invented wassail, accompanied by great merriment of singing and Morris dancing.  This type of wassail is traditionally associated with the January season and no traditional versions of this type of wassail are known in Gloucestershire.

For more on the Gloucestershire wassail song and custom, with different village versions, click here.

The other type was the house-to-house wassail, carried out in Gloucestershire until recent times and still carried out traditionally in parts of Devon and Cornwall.  This was usually done in the period from just before Christmas to the New Year.

Versions of the song and the custom have been noted in the West Country and the West Midlands, Sussex, the Isle of Wight, the Welsh-English border area and in Yorkshire, as well as in the Gower Peninsula in Wales.  Apart from the Gower area, the traditional wassail does not exist in Wales although there are similarities with the Welsh Mari Lwyd New Year tradition, which sometimes has the word wassail in its song texts in Welsh.

To see if there is a wassail happening near you, visit the Christmas Diary