While Shepherds Watched Their Flocks By Night

Collected from Madge Stevens and the Stevens family, Bisley, by Gwilym Davies on 1 December 1987.

This remains one of the most popular of today’s carols and one that has been mercilessly parodied by generations of schoolchildren.  The words are attributed to the Irish-born Nahum Tate (1652-1715).  Tate was a poet, hymnist and lyricist who became England’s poet laureate in 1692.  It is not known when Tate wrote the composition but the words appeared in Tate and Nicholas Brady’s 1700 supplement to their New Version of the Psalms of David of 1696. It was the only Christmas hymn authorized to be sung by the Anglican Church.  The usual tune to which it is set is Winchester Old, a tune dating to the 16th Century.

Despite the popularity today of the Winchester Old tune, the carol has been set to many different tunes, notably by local village music masters for their village choirs.  A good many of these tunes turn up in West Gallery music collections or in oral tradition, but usually derived from the West Gallery tradition. 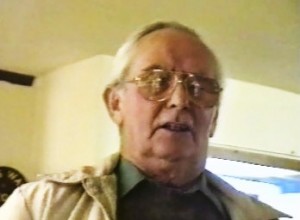 A distinctive tune for the song was recorded by Roy Palmer from Mel Jones of Newent in January 1995.  Mr Jones learnt the tune at the Royal Exchange Inn, Hartbury in 1947 from  the landlord Harold Merriman.  The recording of Mr Jones can be heard talking about the song and singing it here. (British Library Sound Archive)

Yet another tune for the carol was collected in 1977 by Bob Patten and Andrew Taylor from Charley Williams of Brockweir.  This carol can be heard on the British Library Sound Archive website by clicking here.