Reg Wilkins and the Wilkins Family

The Wilkins family took part in the Tetbury Wassail for many years. Reginald Wilkins was interviewed by Vera Phillips and Doug Goulding of the History of Tetbury Society about 1990 and stated that his great grandfather had taken part before 1860 with the Woods family. From 1860 his grandfather had done it and his father started in 1900 when the Cleaver family came in to take the place of the Woods. He himself had been a lamp boy (presumably lighting the way for the wassailers) for five years up until 1923 when he started to take part at a very early age in the Wassail in the place of Mr Edgar Cleaver. The Wassail custom ended just before the Second World War in 1938. Reg himself took part in the custom and is shown in the photograph of the Tetbury wassailers held at the Library of Congress.

Many generations of the Wilkins family have lived in Tetbury. One family tree traces them there back to the year 1585 when Thomas Wilkins was the first member of the family to be born in Tetbury after his father moved from Oxfordshire. They also intermarried with the other wassailing families, the Woods and the Cleavers.

The earliest wassailler that we know of was Reg’s great grandfather, Henry Wilkins. Although his father, also called Henry, was from Tetbury in 1841 the family were sharing a house with another family in Connor’s Court, St James’, Bristol. His mother was stated as born in Ireland (but see later). His father and elder brother, Thomas, were both labourers. Henry was 15 and had two other younger brothers, Michell and John, and a younger sister, Catherine. In 1847 Henry married and by 1851 he was back in Tetbury, working as a ‘parchester’ (sic – probably plaisterer) and living on The Green with his wife, Sarah Ann, formerly May, who was then stated as having been born in Shipton, Glos.. They then had two children: Chs.(Charles) and Celia born between 1848 and 1850. The family continued to live on The Green in Tetbury. In 1861 Henry was working as a plaisterer. Charles Henry was then working as an errand boy. They had a new one year old son, Robert May, born 1860, and a lodger, Thomas Wilkins, an 18 year old agricultural labourer. May was a family name, being Robert’s mother’s maiden name.

By 1871 Henry and Sarah had more children living at home born between 1858 and 1871: Elizabeth, M., Mary J., Frederick R. Francis, Emily H. and Ada. They still had a lodger, who was now 19 year old George Wilkins. Henry was working as a tiler and plasterer, Robert was a labourer and Sarah and Celia were laundresses. Mary and Frederick were scholars. By then they had moved to Harper Street, Tetbury. By 1881 Sarah had died but Henry was still working as a tiler and plasterer living with his children Mary, Frank, Emily and Ada. Also in the house was his grandson, Edward Wilkins. All had been born in Tetbury. By 1891 Henry was still a tiler and plasterer but by age 66 he had moved in with his daughter, Mary, then working as a charwoman and married to Edward Cleaver (another wassailing family), a road labourer. Mary and Edward had four children: Lizzie, Henry, Alfred and George born between 1883 and 1891.

By 1881 Reg Wilkins’ grandfather, Robert May Wilkins, also a wassailer, had moved out of his parents’ home and was also living in Harper Street, Tetbury, with his wife, Eliza, formerly Wood, whom he had married in 1879. (Eliza’s grandmother was a Cleaver, another good wassailing family). Eliza had three brothers: George born 1861, Joseph born 1868 and Benjamin born 1878, so they may well have been the Woods which Reg referred to as being other wassailers who took part in wassailing from before 1860 until 1890. Their family also lived in Harper Street next door to Henry Wilkins in 1871 and had lived in Harper Street since at least 1851. Robert and Eliza were still living in Harper Street in 1891 and then had three sons: Robert May born about 1882, Oliver John born 1885 and Walter May born 1888 .Robert Wilkins was a road labourer. Robert, his son, and Oliver were scholars.  All the family were born in Tetbury. They had also had a daughter, Jane in 1884 but she died in 1891 aged 7.  By 1901 Robert was still living in Harper Street, Tetbury with his sons Robert and Walter Wilkins who were both labourers, together with Ellen Hicks and probably her son Frederick who were boarders.

Reg’s father, Robert John Wilkins, was also a wassailer and is shown below in the photograph of the Tetbury wassailers held at the Library of Congress. 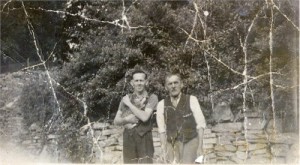 He married Florence Lavinia Nurdin on 18 Aug 1907 in Sherston Magna, Wiltshire. By 1911 Robert Wilkins was still living in Harper Street working as a road labourer for the Rural District Council. He and Florence then had two children: Caroline Edith Eliza born in 1908 and Reginald (spelled ‘Regnold’) John born 1909.  Eliza died in 1914 aged 6. Also boarding in the house in 1911 was a schoolboy, Thomas Nurdin aged 7, presumably a relation of his mother’s. All the family were born in Tetbury, In 1911 they had another son, Stanley E. G. Wilkins, who died in Tetbury 1942 aged 31 and also a son, Kitchener R. Wilkins, was born in 1915. Kitchener married Dorothy Bye in Cirencester in 1938 and is believed to have died in Australia in 2000.  A further son, Robert Douglas Wilkins, was born in Tetbury on 24 December 1916, was married and died in Cirencester Registration District in 1994. Walter May was also born to Robert John and Florence on 21 August 1921.He died on 2 November 1997 in Gloucester having had three daughters. Robert John and Florence had another daughter, still living who married Norman Shaw and had a daughter. Norman was killed in France whereupon she married again apparently to Gabriel Wilkins. who was born and died in Tetbury. Reg’s father, Robert John, died in 1953 in the Cirencester Registration District

Oliver Wilkins, Reg’s uncle, was also a wassailer and is shown in the photograph of the Tetbury wassailers held at the Library of Congress dressed on the Bull’s costume. By 1901 Oliver had apparently left home and in early 1907 was married. By 1911 he and his wife, Annie, formerly Moulder, were living in Harper Street and had a daughter, Rose born 1911 and a son, Oliver Moulder born about 1907. Oliver was a shepherd on a farm. All the family were born in Tetbury. They had three further daughters, Violet May born 1912, Eliza Harriet Irene born 13 January 1915 and Millicent, in 1918. Millicent married Frederick J Bull at the end of 1939. Oliver’s son, also named Oliver, married Lucy Ayres in 1935 in Tetbury and Eliza married James Baker in Tetbury in 1936. Oliver, the father, died in 1965 in the Cirencester Registration District. Eliza died in 1977 in the Cirencester Registration District and Robert, Reg’s grandfather died in Tetbury in 1916. 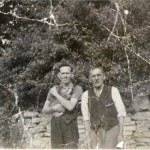 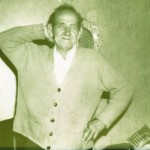 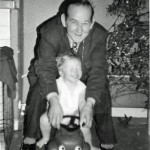 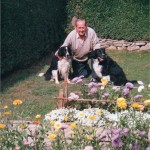 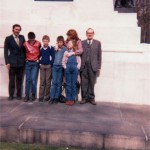 Walter May Wilkins 1985 The Cenotaph

By 1911 Reg’s uncle, Walter had also married and was living also in Harper Street with his wife, Caroline and they had had 2 children, both of whom were born in Tetbury and are still living: Walter born about 1909 and Ellen born about 1910. Walter was a road labourer and he and Caroline had been married for 3 years and. Caroline was born in ?Vancelass Barn, Glos.. In 1911 they had a son, Stanley and a daughter, Violet. Stanley died in Gloucester in 1945. Walter, the father, was killed in action in Northern France in the First World War on 12 March 1916 whilst serving as a private in the 1st Battalion the Gloucestershire Regiment.

[Notes by Carol Davies with thanks to the History of Tetbury Society and Margaret Wilkins Family Tree on Ancestry.com-October 2012]