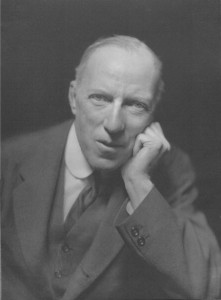 Photo courtesy of the English Folk Dance and Song Society

Cecil James Sharp was born in November 1859 in Denmark Hill, South London, the son of James Sharp, a slate merchant. He attended Uppingham School before starting a mathematics degree at Clare College, Cambridge. In October 1882, he departed for Australia where he resided for nearly ten years, working for five years as Associate to the Chief Justice of South Australia and then as a partner in a private venture, the Adelaide College of Music. There, despite his lack of formal musical training, he taught singing and music theory, in his spare time writing compositions of his own and conducting with the Adelaide Philharmonia Society.

In 1893, the year he married Constance Birch, Sharp was engaged as a music teacher by Ludgrove School, a preparatory school in North London. During his seven years in the post, he took on a number of other musical jobs, most notably as Principal of the Hampstead Conservatoire of Music (1896-1905.) He also later acted as music tutor to the Royal Household (1904-7).

On Boxing Day 1899, Sharp was staying with his mother-in-law in Oxford and happened to see the Headington Quarry Morris Men performing a set of 5 dances. He was fascinated and called back their musician, William Kimber, to notate the tunes and later arrange them, although at this point with seemingly little idea of what to do with them. However, by 1901 he had joined the Folk-Song Society (formed in 1898) and a year later had published A Book of British Song, which included many traditional songs and demonstrated his growing interest in folk music and the uses to which it could be put.

When in 1903 Sharp ‘discovered’ folk songs in Somerset, he saw its potential for educational use and general publication. Back in London he prepared lectures and attracted much coverage in newspaper articles. Indeed, by 1907 his seminal English Folk-Song: Some Conclusions was published, thus establishing him the foremost expert in the field. Later, in 1906, he returned to his collecting of dance and generated national interest in morris and sword dancing with public performances and regional training programmes. Sharp founded the English Folk Dance Society in 1911 which, together with the Folk-Song Society, forms the basis of the English Folk Dance and Song Society today.

Although a relative latecomer to the folk revival, Cecil Sharp became the most high profile and certainly most prolific folk music and dance collector of his contemporaries. He noted down 4,977 tunes in all, including nearly 3,000 songs from England and over 1,500 on his four collecting trips to the Appalachian Mountains in the USA (1915-18). Much of this work was carried out at his own expense or with the help of meagre grants from benefactors, particularly in the USA. He published extensively from his fieldwork and a select bibliography of his works can be found in ‘Still Growing: English Traditional Songs and Singers from the Cecil Sharp Collection’ (London: EFDSS, 2003), pp. 117-120.

Cecil Sharp died in 1924. He was and remains a controversial figure in many ways but what cannot be denied is his outstanding collection of folk songs, tunes and dances. There has to date been only one biography, written by A.H.Fox Strangways in 1933, later re-edited by Maud Karpeles in 1967. The division of views on the man is best illustrated in the works of Dave Harker and Chris Bearman (see http://efdss.org/songbib3.pdf).

Sharp’s fine copy manuscripts reside with Clare College, University of Cambridge. All other manuscripts and artefacts, including his field notebooks, correspondence and photograph collection, reside with the Vaughan Williams Memorial Library at Cecil Sharp House in London. For a clearer description of Sharp’s various collections, see [Heaney, Mike] ‘The citation of unpublished material by or relating to Cecil Sharp’ in Folk Music Journal, 8 (2002), 132-135.

Sharp visited Gloucestershire extensively, often to collect Morris Dances, but he also noted over 200 songs from the country.  His last collecting visit to Gloucestershire was in 1921, but he was also involved in organising folk dance displays at Cheltenham College.